On the eve of my annual Southern Sojourn, a #ThrowbackThursday reprisal from last summer’s missive scribbled between Sazeracs and Hushpuppies. 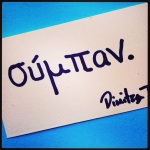 After an unanticipated summer semi-hiatus, we return to our regularly scheduled WordBowl story programming with a high-concept Greek term — and our first WordBowl to be written in a city other than NYC — which literally translates as:

But a more accurate interpretation —courtesy of Dancer*Dreamer*Daredevil Dimitra D. — refers to the “something beyond” our universe (and, perhaps, our understanding)

Birthplace of a beauty: The Sazerac Bar

Berkeley Hills, mid-1990s, Bay Area barreling towards the end of a century, me hurtling towards thirty. “Start up” not yet a noun, “IPO” not yet a business plan, e.mail addresses more perceived company perk than assumption. First hints of our mobile future, Internet connections still tethered to a physical location, we roadwarrior vanguard hauling laptops, modems the size of suitcases, weighty with import.

A couple-three years into my technology magazine publishing career, straddling what would soon become Old Media and New Media, I sat on the deck of the home I rented from a film producer friend awaiting the ideal real estate conditions to sell, sipped Bonny Doon Cigare Volant from a proper wine glass, looked out at a view framed by redwoods, Bay Bridge traffic twinkling, San Francisco a shiny toy for the taking. A family of deer frolicking amongst the unkempt foliage, me amidst the detritus of an impromptu dinner party arranged between giddy colleagues via our new walkie-talkie Nextel company phones. I raised my glass, a solo toast. 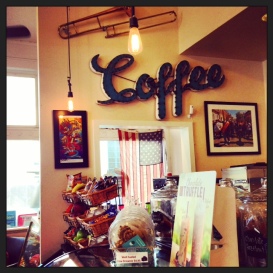 As a young girl, I went along with the usual group imaginary play: stuffed animal hospital, school, war. I tended to eschew playing “house” as my real life family —omnipresent babies squawking and parents battling against, settling into, an armistice of compromised dreams — disabused me of any aspirational notions. Alone, my “let’s pretend” scenario an amalgamation cobbled from memories of our once-upon-a-time nomadic baseball years, Disney musicals, whatever book I most recently devoured, my parents beloved 1930’s screwball comedies and 1940’s noirs. My dreams in black and white, witty women, dapper men, pristine apartments, balconies with sweeping vistas, cocktail parties with friends who performed on Broadway or wrote for newspapers, jobs I equated with the Big City, before “career” entered my consciousness. An elegant world far, far away from our insular Southern town where kids grew up marry their kindergarten classmates, leave their parental home for another in the same or neighboring neighborhood, content with the known.

In my scenario, I would tesseract at will.

It had not occurred to me to factor love into the equation — another story, folks, another time — I instead romanticized career, compatriots. “Louie, I think this is the beginning of a beautiful friendship.”

On my hilltop perch, swirling a wine so leggy it leapt from the glass, I toasted to achieving my childhood fantasy: fabulous city, fabulous career, fabulous friends, hosting parties in a fabulous (albeit rental) home with a fabulous view. I was twenty seven years old, the age my father retired from Major League Baseball.

I groped for bigger dreams.

Startling, to wonder if I had reached the limits of my imagination at the precise moment an avalanche of tech innovation was clear-cutting historical assumptions, proving perceived limits merely a human mental construct.

Instinct insisted there was more, beyond, but I lacked language for the longing.

How appropriate to contemplate such a layered word in such a historically layered city, and that the piece required additional work somewhere beyond.  The initial notes for this story scribbled in the Sazerac Bar at the Roosevelt Hotel — reputably the birthplace of this notoriously storied cocktail — in the French Quarter, New Orleans. I began writing this piece fueled by chicory coffee at PJ’s, also in the French Quarter, steps away from St. Patrick’s cathedral. The sacred and the profane occupying the same space in this town, New Orleans it’s own special universe. Editing took place with a De la Louisane at bespoke cocktail haven Attaboy on the Lower East Side, Manhattan.

Do you have a word for WordBowl? I would love to see it! Click HERE.