Spent the week on a series of phone calls with a Louisiana-based children’s media company, which inspired recollections of my own Bayou-based childhood memories. Went thought the WordBowl archives to unearth this one for #ThrowbackThursday: 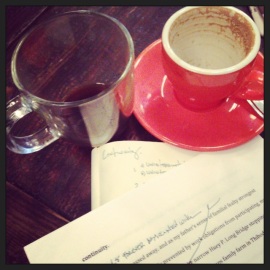 Great Aunt Ola’s wake, a heavy Louisiana heat that threatened rain without a cloud in sight, an appalled relative I called “aunt” out of courtesy set her mind to rectify a grievous situation: I, a Toups — by blood, if not by name — had never ridden a horse.

Dispatched to a barn, plopped atop a horse — alright, a Shetland Pony — funeral dress tucked around my pudgy still-little-girl thighs, unsteady rocking as Prissy adjusted to and accepted my weight, then the thrill of Prissy trotting towards full gallop, the soft splat of my carefully coiffed curls against my back. Great Aunt Antoinette howling, my mother less amused, concerns over the potential damage to my fancy hand-smocked dress battling with her own Texan childhood astride a horse, inconceivable a daughter of hers had been equine bereft.

Once I was dressed in appropriate borrowed clothes and almost-fitting boots, I was given free reign, a delicious moment of exhilarating liberty.

“Year of the Horse” art by Anna Noelle Rockwell

One other occasion arose to ride, the summer before I became a teenager, when, after much debate, my parents took us for the first (and last) time to the Toups Family Reunion. We drove across the perilously narrow Huey P. Long Bridge, through the waving fields of sugarcane which would one day be replaced by soybeans, past endless rows of orange trees drooping with fruit, gaping at the vast array of picnic blankets and food and people all related to us.

Our actual cousins — my father’s brother’s brood — greeted us on horseback, Cousin Michael dismounting, scooping me up as though I were still small, me clutching the saddle horn, him holding the reigns, and off we galloped, leaving my younger siblings behind.

It was no Great Aunt Ola Memorial Freedom Ride. I missed my Prissy.

On the ground, I was small in the sea of people, crawfish boil pots, sugarcane, badminton games, accents as thick and redolent as the humidity. Relative strangers called us over as we roamed, individually and in packs, announcing themselves, launching into detailed genealogy digressions, declaring their love for my grandmother, Lord Rest Her Soul, and their relation to one of the remaining fourteen Great Aunts, weaving strands of Toups and Marmons into a cohesive if convoluted narrative. My middle brother consistently mistaken for one of Uncle Johnny’s children, with his jet-black hair and dark eyes, he looked more akin to that Louisiana family than ours, a crucial cultural disparity.

We grew lazy and listless, drunk on rich food and other people’s memories, sticky from oranges peeled and eaten like apples, juice slicking down our chins until finally, mosquito-munched and sun-dazed, we piled into the Plymouth, thighs searing to scorched vinyl seats, semi-sleeping as my father drove, silent, my mother chattering to keep him awake until we arrived home, we, the single strand of Toups to reside in the foreign citified environs of Hattiesburg, Mississippi.

“continuity” handwritten at one of my favorite writing-and-imbibing spots, Buvette (a sliver of Paris nestled in the West Village) and edited at the bustling Midtown outpost (oasis?) of Cafe Grumpy. “Year of the Horse” artwork by Anna Noelle Rockwell (more of her equine prints and cards in her Etsy shop here).

Are you a logophile? Have a favorite word? I want to hear from you!

Back-to-School season is upon us (where oh where did the summer fly off to?) and although NYC remains summer sultry, I find myself reminiscing about southern school days…

Our word today, which means “given to jesting” (“jest” is a playful or amusing act; a prank), courtesy of D. Nudo: word advocate and champion of all the news that’s fit to print.

School buses, from the first days of kindergarten, raucous, an unsupervised no-man’s land between home and homeroom, given to mobile adaptations of backyard games, Freeze Tag, Red Rover. But the Junior High bus, with its eighth graders looming larger and more worldly than us just out of grade school, had a rambunctiousness that could careen into cruelty as social hierarchy classifications codified, a subtle, specific process to which I, a transplanted non-Southerner — initially invited out of curiosity or hospitality to join the cheerleaders while also grouped with the so-called smart kids who were subjected to all manner of 1970’s educational experimentation — was attuned, acute. I once negotiated the borderlands between the two if not with ease, with naïveté.

That was grade school. This new land, the Junior High bus, trickier.

I sat shriveled small in the denim pants painstakingly sewn by my mother to mimic the ragingly popular Calvin Klein jeans — down to a label she swore was included in the Butterwick pattern — embarrassed by this public sign of my family’s slide along the recession’s razor’s edge just as girls discarded ponies for fashion. I avoided the obvious troublemakers, found some seats chillier than others, the cheerleaders still scooted over but only smiled with their mouths, the smart kids nodded without making full eye contact.

And then there was Boo. 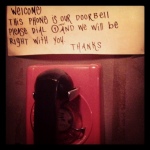 through the phone booth…

Boo, eighth grade football hero, blonde, sunny, punching shoulders and guffawing his way towards a successful high school career. He was friendly to all, unlike other kids less secure in their popularity, who knew their precarious status could be cemented by a well-timed barb or a well-aimed spitball.

Boo and I got off the bus at the same bus stop, if I was willing to trudge up the hill to my house afterwards. Boo, assumptive of accolades, attention, happiness. Sports fields existed for his Friday night glory, he did not know of the shifting tides of fame, fortune, the ramifications of a bobbled ball. He found me funny — funny haha, not funny weird — and in his presence I could pretend to be.

We acquired 10-speeds the same weekend — his a gift from his parents, mine a long-held babysitting money layaway goal — we raced down Dead Man’s Hill, flinging arms overhead for brief seconds before grasping curved handlebars to keep from veering into each other, ducked the occasional car with a wave and a grin, spun around cul-de-sacs. Boo crashed through the woods, rode further than I had ever gone, past the tree Baby Brother once fell out of, past the abandoned neighborhood fort, and I followed him, laughing as his front tire jammed against a fallen pine, laughing as he rammed his bike into mine — our faces close, shoulders closer — laughing even as he flung a clump of wet red clay at my head to stop me from laughing.

We walked our bikes back as the sun set — the universal Bat Signal to head home — mud-spattered, mosquito-bitten, proclaimed we would ride like this every day. But baseball season started that week, Boo every bit as necessary at bat as he was on the scrimmage line, there was no reprise of the Dynamic Duo Ride and in the fall he took a different bus, off to high school, we never rode together again.

Inspired by the back-to-school spirit, I went Old School while working on this piece: one of the original East Village cocktail speakeasy spots, PDT (please don’t tell), which is nestled within perennial late night snack destination Crif Dog. And yes, you can order hot dogs at the bar, try a “Chang Dog” created in partnership with Chef David Chang, while working your way through the carefully calibrated PDT cocktail list. I chose the PADDINGTON cocktail, as it was named for the childhood literary character (and because I’m a sucker for Lillet Blanc).

Caffeinated editing took place at the original Mud Coffee (NYCers have likely spotted one of their bright orange coffee trucks roaming downtown), where the soundtrack has not changed in all the years of operation.

Do you have a suggestion for WordBowl? Would love to hear from you, comments link at the top of this story (or if you are on a phone, scroll to bottom).

Do you have a word for WordBowl? Terrific! Use the form below.