In honor of the valiant Chicago Cubs and their steadfast supporters, I present today’s #ThrowbackThursday piece in which Wrigley Field is a prominent player… 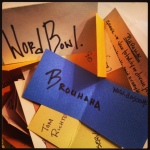 We piled into the El train, Chicago-bound, a motley crew of university freshman jostling for seats, sipping surreptitious Schlitz from paper bags, giddy with the first hints of spring, audacity of skipping class, the prospect of a Cubs double header. The guys’ faces lit with remembrances of boyhood games past, father-son watershed moments. My own face flush as we clattered on the rickety tracks to my first MBL game since my father retired, since I was forced to swap baseball parks for kindergarten classrooms.

We lacked tickets and proper team colors, possessed passable fake IDs. Stopped for Yagermeister shots and beer chasers, scrambled to Wrigley Field, which seemed smaller than the ballparks of my memory. We scored seats, teetered to our section, the cheapest seats in the house, bantered with Bleacher bums.

In the expectant stretch between frenetic arrival and first crack of bat, the guys —and they, we, mostly, guys — traded statistics, debated alternate scenarios had #45 not been injured, brandished hometown affiliations, steadfast beliefs in the superiority of Yankees, Patriots, Cardinals, Dodgers. The bravado of boys.

Unlike the peripheral girls, I was included in the conversation, assumed to possess an encyclopedic knowledge of game history, perfect recall of double plays and near shut-outs. They assumed I, by proximity, possessed the same arcane knowledge as ardent fans.

From our outfielder vantage point, the players, the monumental men of my youth, appeared in miniature, blips on a screen, like a video game. I choked on my beer, tepid as tea. It had not occurred before, that baseball was a game.

Classic Cubs: valiant struggle, a couple of brilliant plays buried by bouts of bad luck. We shouted for hot dogs and cheered for cold beer. Our winterized skin tinged pink in the weak spring sun. The crowd thinned at the bottom of the sixth, we stayed to the bitter end. I refused to dishonor the players with an early exit. 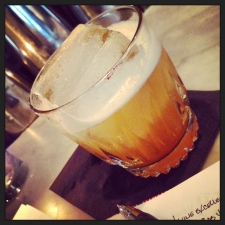 We drank at the bar directly across from Wrigley while fans salved their wounded team pride with post-game beers, back-slapping buddies, sympathetic wives. We rehashed pivotal plays with the panache of pros, unlike the real pros, the ones on the losing end of nine innings. The players with families who know there is no succor for a bobbled ball, mismanaged steal, botched bunt, sure slider breaking into a curve, strike three with the bases loaded. Crucial plays rehashed in endless lacerating loops, punctuated by tossed equipment.

My friends announced — to all within earshot and a few beyond — me as the daughter of a pro ball player, the Cubs fans inhaling with excitement, exhaling disappointment when they failed to recognize his name. I obliged with stories of my father’s legendary teammates, accepted shots from strangers enamored by even this tangential link to their Boys of Summer idols.

I did — really! — attempt to handwrite this story in a sports bar. I failed (noise, temptation to wager on a game). I did, however, write this with a SMOKING GUNS cocktail (created by Daniel alum Xavier Herit)  at the jewel box of a bar nestled inside Wallflower (west village). Editing took place at the Gotham West Market outpost of Blue Bottle Coffee.

Do you have a word just begging to be a story?  Click HERE to play WordBowl!

MONDEGREEN:  a word or phrase that results from a mishearing of something said or sung

ORIGIN:  from the mishearing in a Scottish ballad of “laid him on the green” as “Lady Mondegreen”

During an author (Michael W. Clune, GAMELIFE) and editor (Dan Piepenbring, THE PARIS REVIEW) conversation this week, “mondegreens” were mentioned during a particularly insightful non sequitur. In this spirit I offer one of the very first WordBowl words as today’s #ThowbackThursday piece.

“Mondegreen” from Josh T, who does not cop to ever mis-singing “’scuse me while I kiss this guy” while listening to  Jimi Hendrix’s Purple Haze

Audience applauds with assumption, un-syncopated shouts for the song not yet played, the song, his minor hit, as they head offstage, momentarily, encore expected. 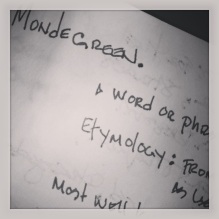 His hit. “His”. “Hit”. White-knuckling through a shot at sobriety. For her. Ignoring his band’s murderous mutterings under collective held breath. No pussyfooting around with rehab, he sweat out the worst of it over a long week and even longer weekend — a rare break in the relentless road-e-o — at his uncle’s mountain cabin, just him and the wolves, howling. He returned with a stubbed-swollen toe, a shorn head, a sheaf of intelligible lyrics, and one soul-scraped song. For her.

First regrouping no one optimistic enough to call rehearsal, they pick-picked, loose talk and looser strings — guitar, bass, banjo — until they eased into a good worn groove. Cautious, he played the one his gut screamed, soul-sincere. He will never know — now that his nights do not end with sunrise confessions strewn among scattered ashtrays, clothes, bottles, bodies — whether his bassist innocently misheard or mischievously mangled the hook.

A laugh, a joke caught, carried from rehearsal to first performance, bassist belting out bastardized lyric, drummer echoing. An enthusiastic blogger at the sparsely populated show, Twittering. Blew up fast. Recorded on the cheap, released as a single in anticipation of an album. A freight train, his manager called it, an anachronistic term, but they grew up together in an anachronistic town, a place weighty with musical metaphor.

Now he has legions of far-flung fans, online friends and followers chronicling his sobriety, his pain, his redemption. Fairytale believers. 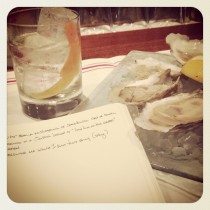 Booze he can manage without. Mostly. The road, though. The road is in his blood.

He swipes a beaded water bottle from an outstretched hand without looking. No need. At some point, recent, the crowds clustered backstage became men with grey beards, silver signet rings, glasses. Fewer females to spark accusations, but she is no longer around to provoke.

He chugs the water bottle like he once did Jack. Or Jim. Or Cuervo. His bassist towers over him, clanks a shot glass against his sweat-slicked skull, he swats at the string-taunt arm, they half-hug-back-slap, his bassist’s smeary face triumphant, they howl, drummer joins rat-tat-tippity-tap. The crowd’s dissipating claps resurge, crescendo.

He’ll play these sweet venues charging $25-cover-two-drink-minimum to people who shoulder-dance in their seats, the charity gigs, the beer battered dives, play, play, as long as they are wanted by even a handful of people who mouth the lyrics he — they — wrote. And maybe even beyond the wanting. They will ride the road to end.

A battered acoustic thrust into his hands. Collective sigh crests into feverish anticipation.

He strums the first familiar fractured chord. The crowd roars.

And a whole pot of home-brewed Cafe DuMonde Chicory Coffee

Have a word for WordBowl? Use the form below or send wordbowl [at] gmail [dot] com