Today’s luscious WordBowl word comes to us from Lydia (thanks, Lydia!) of Urban Sound Review 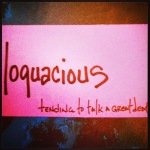 “…so we’re all up in it, mad drum’n’bass, excellent tracks I picked up in the UK — what a trip, Raindance, Genisus88, the beatmasters who ignited this thing, you gotta get your ass over there — I’m scratching in some funk, and we roll the video, projected wall-to-wall, blown-up and out, slow-mo, I’m deepening the groove, heavy sub-bass, and no one recognized it, even though it was on CNN like non-stop for a while, such sick shit — literally sick, everywhere — George W. Bush yakking into the lap of the Japanese Prime Minister, and the faces, the horror on all those faces surrounding him,”

Bloody Mary schlurp, bits of horseradish clinging to the stubble above his lip. 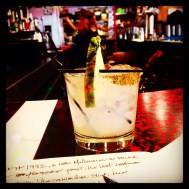 “Oh man, I can practically feel the vitamins coursing through my veins! Whatever that sparkly girl, the one with the butterfly wings, handed out was cut to shit with speed,”

“You were already out of there, right? Damn! Check it: when the camera zoomed in on Bush’s face, we paused, and I sampled the “turn around, bright eyes” snippet from that Bonnie Tyler song, it was transcendent — seriously! — the humanity in those eyes, they melted the screen. Our president, the leader of the free-fucking-world, but in that moment a man, a human felled by microbes or parasites or some shit, all his political power meaningless. He who gave us Desert Storm, our first fucking televised war, captured on video bowing — literally, doubled over — obsequious to a higher power, to the body, or nature, primal forces the existence of which is unacknowledged until we are felled by their effects.”

“Like this Rodney King shit. unacknowledged undercurrents, fears and resentments gurgling underneath this construct we call civil society, and I’m not talking just about anger, righteous anger. I’m talking about hope.”

Not your everyday cuppa

“Don’t look at me like that it was hope, is hope! Hope for a future without artificial barriers between races, man-made class structures, peoples housed in specific geographic zones within our city, like Indian reservations, all the same bullshit, inflicted by those who seized power, declared war, claimed victory. So even as shit-crazed as these past weeks have been, as Los Angeles burned, so did something else, and at some point we rubbed the ashes from our eyes, looked at each other and really saw each other, as people, because once rage burns away, we are left with is hope. And love! Yes, I said love!” 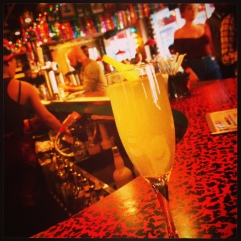 “Someone was selling these last night, LOVE a sellout, we wore our love like tribal colors, a love tribe! It’s 1992, we are dancing toward a new millennium, we are shaking off the shackles of a corrupted past, rocketing past corroded ways of thinking — designations based on race or gender or nationality, music ticking to a specific meter, sexuality codified within specific confines — we are all human, we are a world race, we are melding into one glorious, orgasmic species, Our Brave New World an extended middle finger to Huxley and Orwell because we survived the Apocalypse, we are post-apocalypse, post-race, post-gender, there is no turning back, we incinerated those bridges, we are beyond just getting along, we will be worthy of our hope, worthy of love.”

Out of loyalty to the dearly departed 7A (although in truth I had not been in for a 3am patty melt in years), I initially eschewed Miss Lily’s Avenue A but on a bitter winter weekend afternoon their World-Music-by-way-of-Ibiza vibe proved irresistible.

And if you have yet to experience Everyman Espresso, drop whatever you are doing and head deep into Soho for — depending on your mood — one of the most thrilling or satisfying cups of caffeinated deliciousness in town. 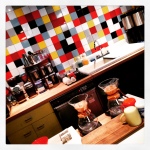 Just saying “tintinnabulation” aloud makes me word woozy! Many thanks to the indomitable Sidney Clifton — herself a keen teller of story — for the opportunity to wrangle with this word.

From the Latin tintinnabulum (bell), tintinnare (to ring), tinnitus (ringing or buzzing in the ears), popularized by Edgar Allen Poe in his poem THE BELLS circa 1849. 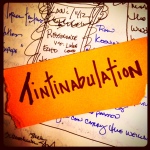 D, returned from a weekend road trip to Athens — Georgia, not to be confused with one of her jaunts to foreign lands, of which I was wildly envious — cupping a cassette tape like my father with a Latin hymnal, reverent, vibrating with knowledge of the divine. 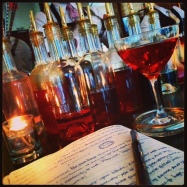 Scribbling with THE BARONESS

D and I, high school transfers, new student standouts in a class reared together since kindergarten. Near-identical AP class schedules, impassioned discussions of The Great Gatsby, Catcher in the Rye, As I Lay Dying that raged beyond the bell, ranged far afield, brushed up against darker terrain. She attempted to tutor me in pronouncing passable French; I endeavored to illuminate for her the metaphors of physics. Wary friendship. We spoke little of our families, her real estate tycoon mother as much local legend as my former pro ballplayer father, we presumed familiarity. Everyone else had read the newspaper stories. I did not ask beyond what she grudgingly volunteered — brother away at college, stepfather referred to as “Mr.” — she made none of the usual inquiries, either. Our tacit understanding verged on complicit.

Our teenage soundtrack consisted of the indelible radio rock anthems of a previous generation clinging to cultural dominance, bluesy standards wafting from behind the swinging doors of every Southern bar, smooth-groove love ballads signaling couples skate at the roller rink, baroque metal nodded to by friends’ older brothers in bedrooms shrouded in clandestine smoke.

Music that belonged to others. 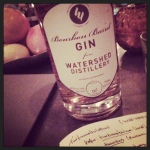 D picked me up after my shift slinging fries at a local fast food joint, we tore down a highway, windows down, wind whipping. Six-packs sweating in the trunk. A moon bright enough to read liner notes by, song titles hinting at mysteries beyond the ken of radio rock, “Pilgrimage”, “Moral Kiosk”, “Talk About the Passion”. “Radio Free Europe”.

Parked by a lake — a once-popular make out spot, until the cops caught wind —we listened to the album straight through and over again, the music echoed across the water in concert with the crinkled buzz of palmetto bugs, the spaces between the notes thrummed. We drained beers and the car battery, listened in lieu of conversation. Listened until we nearly discerned the mumbled lyrics, discovered a new rhythm in the unfamiliar cadence, heard truths in the unexpected pauses. A cascade of aural epiphanies.

Music without history. Music we might claim as our own.

After the beer ran out we drank warm juice — packed to mix with the vodka we failed to procure — hazarded brief eye contact, conspiratorial. Curfew loomed. It seemed wrong to start the cassette again when we would not have time to listen to the thing whole. We let the lyrics linger, let our private discoveries reverberate in the sticky Southern air. Let our silence speak volumes. 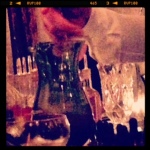 “tintinnabulation” handwritten with THE BARONESS (aged rum cocktail) and a bespoke concoction featuring Watershed Distillery’s Bourbon Barrel Gin (wowza) whipped up by the gleeful mix-master behind the bar at the eddy (east village, nyc). In the wake of such cocktail inspiration, revisions took place amidst the musical murmurs of French waiters at Cantine Parisienne (nolita, nyc).

Would you like to play WordBowl? Drop in a word below: