Amygdala are almond-shaped nuclei located deep within the temporal lobes of the brain; Considered part of the limbic system, research shows evidence amygdala perform a primary role in the processing of memory and emotion. 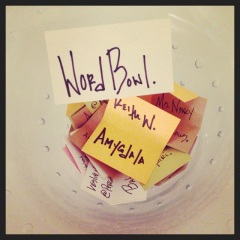 They found my Nana in a dumpster just off the main drag of the town nearest her modest acre abutting one of her daughter’s farms. The search was over two weeks gone before they called in the dogs, the ones returning from sniffing out bodies amongst the earthquake rubble in Mexico. But it was one of the local deputies who pulled her still-breathing body from the pile of rotting fast food and broken crates, crusted industrial condiment cans with jagged tops clinging to their cylindrical bodies, congealed catsup on ether side of the garroted gash.

My mother did not want to worry us. We were told after Nana was stable, hospitalized where she had no nursing affiliation but my uncle had influence. Bones can be knitted together. Brains, with their myriad of thoughts and memories and knowledge, a more delicate task. Even in the best cases, faulty, like a misaligned joint aching in premonition of weather shifts.

Writing amidst the last vestiges of holiday decor

Nana of my memory: unseemly paperback novels passed to me the moment she finished (Coma, The Other Side of Midnight), chocolate chip waffles topped with ice cream for Friday Night Dinner (her interpretation of classic Catholic dogma), card playing until the wee hours, hushing one another’s giggles so as not to wake my parents.

They mended her body. Her mind remained fractured.

She may have declined into dementia before the event. There were signs, we Monday Morning Quarterbacks agreed: the age-inappropriate garage sale gifts, as though we were not expected to grow or we grandchildren were so voluminous as to be interchangeable. The bag of cash she stashed in her oven and forgot until it caught on fire. Her adamant disremembering of unfavorable card game scores. We did not use the word Alzheimer’s, then.

Years after Nana’s hot-as-Hades funeral, I gleaned occasional tidbits as to what she was like, my Nana, in the twilight between abduction and death.

Apropos of nothing other than a half-glass of Chardonnay, my mother described, tears welling, a rare afternoon outing at a local mall. Nana wailing, “I’ve soiled myself like the babies whose diapers I used to change,” crying until my mother and my aunt maneuvered her back to the hospice, removed her filthy undergarments, fitted her with a diaper. 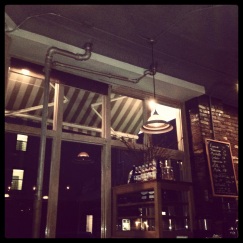 In her brief lucid moments, Nana was apparently capable of feeling shame, a cruel cosmic joke played on a woman whose mother ran off with the youngest baby, leaving Nana to raise her remaining brother; a woman whose husband died in a plane crash returning from WWII, or hung himself, or was assassinated for being a spy, depending on the family legend to which one ascribed; a woman who raised five children on her own while perusing her PhD; a woman who took in her estranged mother when she landed destitute on her doorstep.

If she could feel shame, could she also fear? Did she remember, in those feeding tube-fed, adult diaper-swaddled years, what happened to put her there?

The police closed the case, as if to spare us from the trauma of further investigation, as if the tragic results rendered additional facts moot. Nana, the Nana we knew, survived only in our memories.

“amygdala” was handwritten with the first margarita of 2014 at Hecho en Dumbo (bowery, nyc) and edited with a super-caffeinated espresso at Cafe Ost (east village, nyc)

What word tickles your fancy? I would love to include it in the WordBowl word lottery! Fill in the info below: