WordBowl Word of the Day: vernissage, courtesy of  Eileen @itmarksthespot (AKA, the go-to for all things Art & Music) 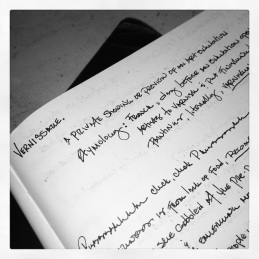 Psssshhhhhh clickclickclickclack psssssshhhhhhhh, dizzying fumes, or she is dizzy from lack of food despite gobbling a handful of paprika-dusted fried chickpeas at the pre-pre cocktail party last night with the Uber-est VIP collectors — people who brandish earliest access as social currency — and a smattering of aspiring tech tycoons, a couple of serious celebrities, a burlesque trio gleefully photo bombing Upper East Siders and Connecticuteers.

She needs air — tonite’s Grand Preview dress will not allow for food — fresh air, away from these spray paint wielding Brazilians, as indecipherable as they are interchangeable, Boy Wonders catapulting from San Palo favela to Soho gallery in one Technicolor Day Glow burst.

Her husband balked at a shared show, initially, but cooler heads (hers) prevailed. Buzz for the WonderTwins-wrought Street-Meets-Carnival art will expose her beloved to new audiences, potential to secure a San Palo show for the World Cup or the Olympics, if the universe is willing (or if she manages to be particularly persuasive in Portuguese). Hubby no stranger to buzz himself, most recently, a well-awarded if not spectacularly well-watched documentary burnishing his reputation among the culturally influential.

A pity the culturally influential rarely posses the funds to posses that which they covet.

Fortunate, his European collector base. 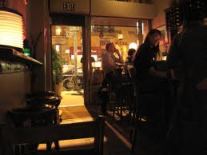 Oh, to pop down to their hotel for a disco nap, but her husband is regaling a gaggle of art-amplifiers, their exact media provenance murky, television or scholarly journal or newspaper or magazine or micro-blog. She’s no longer certain as to who or what is important, these days she courts everyone.

Her husband’s eyes blink, Morse Code, she sidles over, pets his arm, leans in for a polished, practiced kiss. They are their own DynamicDuo.

They will decamp for the hotel at some point for a costume change, make a grand entrance for the VIP Preview, and subsequent Grand Preview. This whole thing a veritable nesting doll of “pre” and “VIP”. She has to hand it to this curator, a maestro, orchestrating desire.

This business of selling, these negotiations between private space and insatiable demand for “behind the scenes”, “ the clamor to draw back the curtain to reveal The Great and Powerful as mere mortal.

As if her husband were a mere mortal. As if mortals could bear such visions, make manifest.

Blame Facebook, Twitter. Both of which he (she) is on, as part of the daily routine as cleaning paint brushes.

A photographer captures the Wonder Twins mid-selfie, a Meta-Moment she (dammit) did not think to do. Their photo-documenting innate, their early graffiti routinely painted over the moment the spray dried, they are born of momentary, obsolescence, next.

Will their work grace hallowed museum walls? Do they care?

She snaps a few candids of Dapper Hubby flanked by the Wonder Twins. Fodder for the social media mill.

Have the barometers of success shifted? Of course. But. Bottom line, money. Who buys, who sells. At what price.

Desire, she understands.  And money, she knows.

Francofile this week for a French word (and Bastille Day celebrations)

In the moment just before Mosaic begat Netscape and the birth of the internet as we know it, I assumed my first executive role, an over-eager 25-year old flush with responsibility and a private office — “office” being a former supply closet I cleaned out the weekend prior to my official start date —poised to prove my mettle.

Initial order of business: figure out what the heck a “Circulation Manager” for a computing magazine did beyond the basics outlined by my entrepreneurial publisher, who “saw potential” in me. I took the Circ Manager for the magazine on the floor upstairs — Wired — to lunch, my treat, launched a charm assault, angling for insider tips. He became my go-to guy, a cultivated mentor. I barely noticed he was a total hottie.

You can see him for yourself, if you locate a copy of Might magazine inaugural issue. He’s one of the naked people.

My business mandate specific — grow circulation, generate revenue — my latitude extensive. “There are no sins of commission, only sins of omission,” our publisher proclaimed, encouraging us, his all-female executive team, to be faster, smarter, braver. Bold.

Silicon Valley was burbling, our magazine translated technospeak for “regular folks”, the kind who could afford a $5k+ Macintosh computer for their personal use. I went from evangelist meetings at Apple to magazine distribution warehouses. Either side, Old World (legacy publishing) or New World (emerging tech), an ocean of men, speaking a specific code. Same World Order.

In one of these across-a-laminated table “speed date” meetings with a group of southerners responsive to my slight accent trotted out for the occasion, the dapper older gentleman — the patriarch who both son and nephew were angling to oust — turned to my consultant, exclaimed how charming I was in comparison to the last guy, the two of them chuckling over historical jokes, an agreement achieved between jovial exchanges, discount percentages, retail shelf placement, guarantees.

At the end of our brief meeting, the elder statesman stood and said, “Don’t worry lil’ darlin’, we’ll take care of you” and patted me. On the head.

I was twenty-six years old.

There was no Silicon Valley success to emulate, the press was years away from promoting polarizing portraits — Meg Whitman, Kim Polese — as role model options. I could strike a blow for an amorphous, larger cause. Or I could nail an immediate business win.

I looked up at my benefactor, smiled, and said, “Why thank you so very much sir,” success and resentment twining tastes in my mouth, bitter battling sweet.

Have a word to toss into WordBowl? Send to WordBowl@gmail.com or use the form below