The unexpected female empowerment spirit at the 2015 Oscars (#AskHerMore, Patricia Arquette’s speech) sent me scrabbling through the WordBowl archives for one of my more conversation-sparking pieces — intriguingly, most via private comment (rather than public) or e.mail — and I am forever grateful to Lynn Messina for providing such fertile word fodder. In honor of #ThrowBackThursday,  EUNUCH:

Do you have a WordBowl word suggestion? Click HERE.

Talk about a stumper of a word…

1. A man or boy deprived of testes or external genitals (cue arias..)

2. A castrated man placed in charge of a harem or employed as a chamberlain in a palace (cue Game of Thrones)

3. One who lacks vitality or power (Oh. A relatable emotion at last…)

“eunuch” comes to us from the mad mind of Ms. Lynn Messina who, when she is not writing books both paper & digital, can be found ruminating on Motherlode, the parenting blog of The New York Times or baking treats to serve at Authors Unbound. 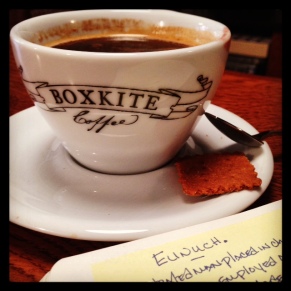 You do not acknowledge “victim” in relation to yourself, a weak word, feminine in all its steerage class citizenship. A term wielded by stoic stars of police procedurals, emphatic talk show hosts, news anchors parroting teleprompter feeds. A media word to manipulate emotion, a word smacking of petulance, self-pity as the complicit cry for attention. If you were any word, it would be “survivor”, but it, too, loaded with connotations, pop culture references. You will not be branded by a moment you remember in flashes, as though watching it onscreen, as fleeting as a YouTube clip. You stuff it down, the thing you refuse to dignify with a name, lock it in some dark mental attic where it remains — your own personal Picture of Dorian Gray — fresh, blooming, vulnerable as youth, even as your exterior armor hardens, your soul steels itself. You pull it out on occasion, at a certain point in a relationship, like an offering, but it is an unrequited gift, there is no comfort in the telling. You learn to catch the words tipped on tongue, as if in the not telling, you can muffle the power of the story. Smother it with silence.

BETTER & BETTER cocktail at Attaboy (and yes, it was)

To all outward appearances, you look the same, lulling family, friends into thinking you are intact, as though something essential has not been hacked away, hijacked. As though you had not been rendered helpless, just once, just one moment. Your stomach roils while your face remains placid, and you — the you that you remember — remains caught betwixt the truculent truce between interior and exterior. Your fantasies, if you allow yourself to fantasize, spiral, veer into unchartered territory, titillating and repellent in equal measure. Fearsome, what you may be capable of, what you may crave. Or what you withhold, or acquiesce to, in the playgrounds of power, negotiating the intricacies of intimacy with this foreign body of yours. 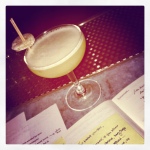 You rise through the corporate ranks, notable for your canny emotional control, perceived ruthlessness, casual disregard for Human Resources guidelines, like the male executives. You chose not to secret yourself away, shrink to the size of unnoticeable. You will not invisible yourself. You count this as a victory. Another brick shoring up your defenses, tangible evidence you have, once again, staved off defeat in these internal battles you wage with yourself. Because you were once breeched, and the war rages on. You are powerless against the roar of emotions you refuse to feel.  Powerless, in the face of what you faced. You do not know what it was about you, why you were singled out. What you had — have — done to deserve this. You will not say, even in your own head, “perpetrator”, “victim”. Or “prey”. There are many ways to survive — you need only find one — but there is only one word for what surviving transforms you into, as if all horrors were equal. If you were in charge, if you possessed the power, you would demand there be at least as many words for “survivor” as the Eskimos have for snow. If you possessed the power.

“eunuch” was scribbled by hand with a couple of bespoke cocktail at Attaboy the more populist incarnation (no reservations required) of beloved LES speakeasy Milk & Honey that takes their booze (and ice) quite seriously which results in delectable imbibing tailored to taste. The painful editing process was ameliorated with a fetching Americano presentation at Box Kite (east village).

Do you have a WordBowl word suggestion? Click HERE.  I look forward to writing a story for you!